The Motorola Edge 20 series information has been leaking intensively in the last couple of days. The first report said that the series will arrive at the end of July, while the second revealed names of upcoming devices. Well, this time around, a well-known tipster details the Motorola Edge 20 variants, and reveals upcoming color options.

That being said, the tipster shared a screenshot in which the device’s variants and color options are shared. So, the Motorola Edge 20 will arrive in both 8GB and 12GB RAM variants, with different storage options. All of these models will offer dual SIM support, by the way. 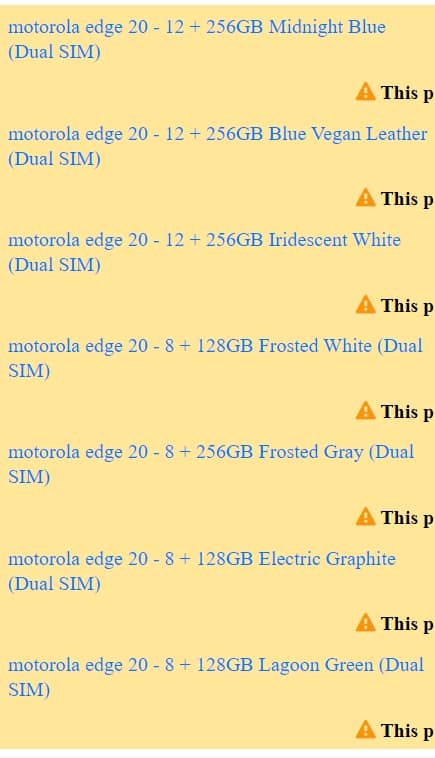 The 12GB RAM variant of the Motorola Edge 20 will include 256GB of storage. You won’t be able to choose between different storage variations. This model will be offered in Midnight Blue, Iridescent White, and Blue Vegan Leather color variants.

A ‘Vegan Leather’ model will also be on offer

So, it seems like Motorola will even offer a Vegan Leather option of the device, though only the most powerful model. There will be enough colors to choose from in general, that’s for sure.

Now, according to previous leaks, the Motorola Edge 20 may be fueled by the Snapdragon 778 SoC. Do note that those leaks were off when it comes to RAM options for the device, as they mentioned only 6GB and 8GB RAM variants. That was obviously inaccurate. So, take the rest of what we’ll say with a grain of salt.

Previous rumors tipped a 6.78-inch fullHD+ display for the device, with 120Hz support. A 108-megapixel camera will allegedly sit on the back of the phone, while a 5,000mAh battery will also be included.