This time of year is right around when we would usually be seeing all sorts of rumors and leaks surrounding Samsung’s upcoming Galaxy Note. Unfortunately, the lineup that made “phablets” mainstream is taking a break in 2021, replaced with new additions to the folding Galaxy Z-series. If you were holding out to replace an aging device with a traditional stylus-equipped phone, at least you can celebrate by grabbing last year’s Note20 for just $600 at Woot.

While this isn’t the Note20 Ultra that garnered much of our attention in 2020, this standard model has become a better value one year later. Without being bogged down with an eye-popping $1,000 price tag, it’s much easier to consider this device. While its display is limited to 60Hz, you’re getting a sleek handheld with excellent performance and battery life. The plastic build might turn off some users, but our review described it as a much friendlier material than the usual glass and metal combination. There are a couple of downsides, like an awkward S Pen placement and so-so camera quality, but for $600, it’s hard to argue with if you absolutely need a stylus with your phone. 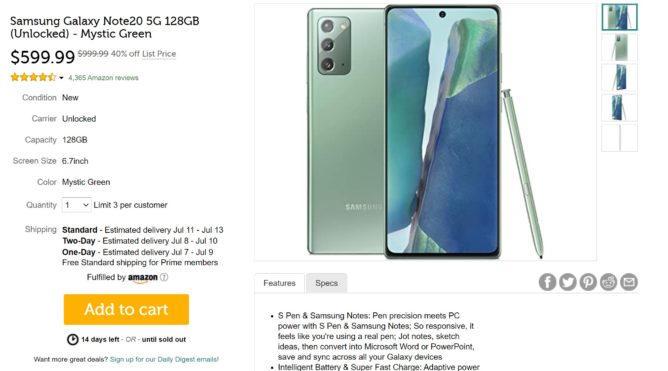 Woot’s deal on the Note20 only includes the “mystic green” model, but it’s available for the next two weeks or until stock runs out. If you’ve been dying to upgrade your phone, grab one using the link below.

The Ominous Ethereum Comparison That Will Leave Bulls Petrified