Samsung will now provide up to five years of security updates to some of its flagship models. The company made the new announcement during its MWC event earlier this week, where it talked about mobile security, a new watch experience, and much more.

Now, before you get excited, let us tell you the catch here. The extended period of security updates is promised only for the enterprise edition of the Galaxy S21 series, Galaxy S20 series, Galaxy Note 20 series, Galaxy XCover 5, and the Galaxy Tab Active 3. So, the regular consumer versions that you and I own aren’t eligible for this generosity from Samsung.

Moreover, the enterprise edition of other lower-cost models like the Galaxy A50 will not get additional updates either. These devices will still get four years of security updates though, just like all other recent Samsung devices.

If you don’t already know, enterprise models purpose-built versions of existing devices for businesses. They come with an additional suite of proprietary work software and security tools that help companies managing their work remotely. Companies can also program enterprise devices according to their work need. Samsung is now promising an extended period of security updates for some of those phones.

According to Android Authority, the eligible enterprise models will get either monthly or quarterly updates throughout the supported period of five years. Note that while Samsung offers four years of security updates to all of its devices from 2019 or later, the frequency of those updates is either monthly, quarterly, or bi-annually depending on the model as well as the time elapsed since its launch.

Samsung has put most other Android OEMs to shame with its software update game in recent years. Last year, the company promised to offer three major Android OS updates to its flagships as well as select mid-rangers. It also extended security updates for up to four years to most phones.

The Korean giant, which is still the No. 1 smartphone maker in the world, has not only made promises though. It has also been much quicker in releasing the latest available updates to its smartphones and tablets. It is now taking things to another level with its latest announcement, albeit only for the enterprise models.

That said, the latest report adds that there’s a “good chance” of non-enterprise versions of the eligible Galaxy devices also getting five years of security updates. That’s because some models like the Galaxy S6, Galaxy S7, and Galaxy S8 reportedly received four years of updates when Samsung had promised only three. We are keeping our fingers crossed on this and hoping for the best. 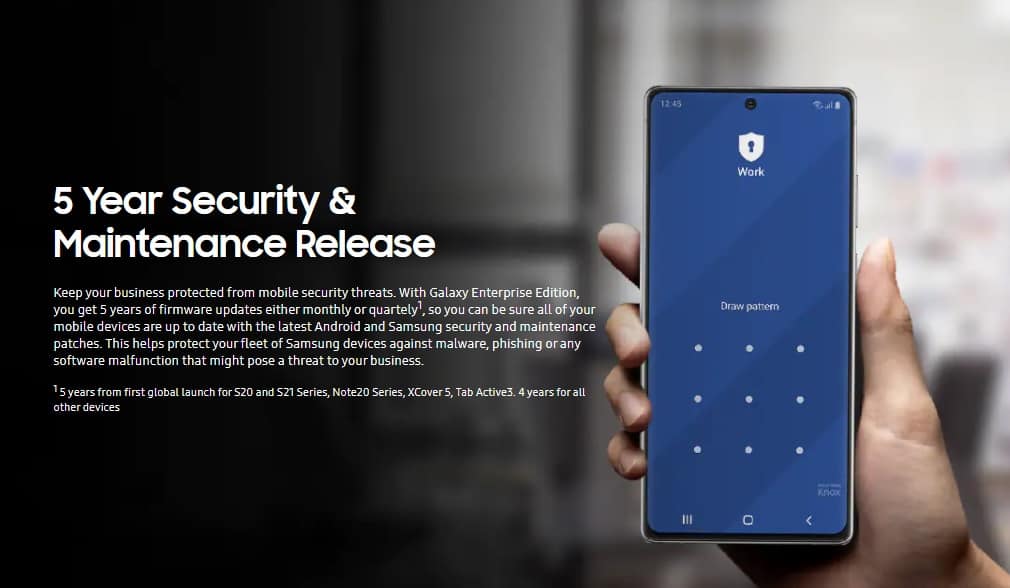 July 29, 20211 min read
We use cookies on our website to give you the most relevant experience by remembering your preferences and repeat visits. By clicking “Accept”, you consent to the use of ALL the cookies.
Cookie settingsACCEPT
Manage consent