It’s odd that after a year of both video conferencing apps and Chromebooks having an absolute boom, the official Zoom app for Chrome and Chrome OS is still so much of a bust. Users frequently complain of missing and relatively simple features, like displaying the contact list and starting direct messages, or the ability to call out to VOIP phones. Zoom has heard your frustration, and it’s planning on introducing a new Progressive Web App this week.

A Progressive Web App (PWA) is essentially a more complex form of a standard website that’s “installed” as an app, basically a glorified bookmark. But PWAs have come a long way in a short time: pretty much every web service Google offers, including Docs and Meet, is presented as a PWA.

The Zoom development team is pushing the updated web functionality as a complete replacement for its outdated Chrome app on the Chrome Web Store. In a blog post, the company announced that the PWA will include at least some of the advanced capabilities of standalone Zoom programs, notably the ability for participants to join breakout rooms, request remote control, create and launch polls and Q&A sessions, and enable or disable video receiving.

Even with additional features planned for addition to the PWA later this year and the requirement that users be on a later version of Chrome, the web version will be missing some of the more advanced features seen on the Zoom app for Windows and Mac, or even mobile versions. But it’s a good start. Expect to see the Zoom PWA beginning Tuesday, June 29th.

And here it is: the PWA, hosted as an installer in the Google Play Store of all places. 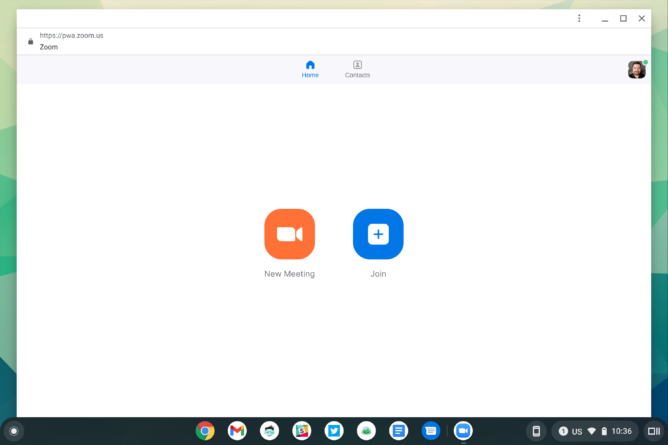 Interestingly, the PWA is installable on Android, which might account for why it has such low review scores immediately. The PWA should be accessible from all desktop platforms at pwa.zoom.us.