You may not want to update to the latest version of Chrome OS 91 depending on which Chromebook you own. Reports are emerging that some Chromebook owners are experiencing significant performance regressions on Chrome OS version 91.0.4472.147, the latest stable release currently offered. Here’s how you can check if you’re affected.

From the details we could gather, affected Chromebooks started slowing down and lagging immediately after receiving the update to version 91.0.4472.147, with some owners reporting that even powerwashing and disabling all extensions doesn’t fix the issues. When checking the Diagnostics app, it becomes apparent that some process is locking up the CPU, resulting in unusually high processor usage, sometimes at 100%. That doesn’t leave any breathing room for other activities. 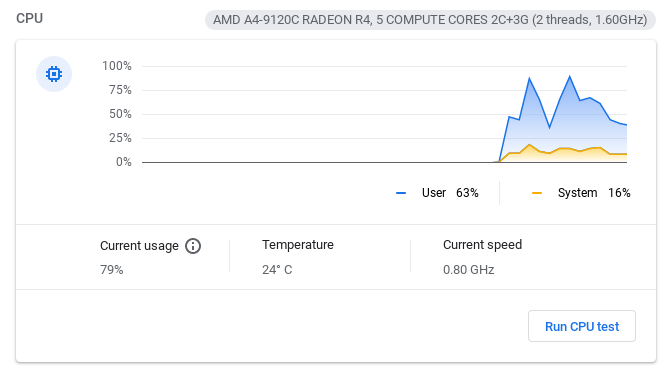 At least it looks like not all Chromebooks are affected by the issue. So far, we’ve only seen reports from devices with grunt and hatch boards, though not everyone affected shared enough details to pin it to these two boards only — more devices could exhibit the same problem. You can check which board your Chromebook uses by visiting Google’s website and looking for your device’s name or by entering chrome://version in your Chromebook’s address bar and looking for the codename at the end of the Platform entry.

In any case, we’d advise being cautious of this Chrome OS update and would suggest waiting out a few days, no matter which Chromebook you’re using. It’s possible that Google might pull the update and provide a fix shorty.

If you run into the issue, you can star the corresponding entry in the Chromium bugs tracker or hit alt+shift+i on your Chromebook to send a report to Google with your specific diagnostics attached.

On the bright side, Chrome OS version 91.0.4472.147 fixes a long-standing bug that prevented some users from copying and pasting files to Linux apps (via About Chromebooks), so you win some and you lose some.